I had the pleasure of showing Jeremy Spencer, Director of Sales, Booze & Buccaneering from West Winds Gin who was in town for the first time around some of the bar highlights several weeks back.

We’d not met before, but had collaborated last year when I created the Centenary Martini, so like any local you want to show off your city and impress the visitor.

Happily I had heard a rumour of new place in Civic- a speakeasy no less- that day. There was a webpage but little else to go on,  so following some excellent martini’s and superb locally sourced food at the bar at the hotel hotel we stepped out seeking some more healing waters.

In time we found a door, a velvet rope and a bare staircase off the anonymous Hobart Place (just off London Circuit near the law courts).

The location seemed apt: a secret world hidden in plain sight, with a knowing wink to the law enforcement and business community all around it.

Down we went, the paint was still smelling it’s that new: days, not weeks.

Open a bare wooded door, and we were transported in a very happy place indeed.  A long copper bar, backlit bar, smart uniformed staff, some jazz tunes in the background and an immediate warm welcome.

It’s a bar like this town has not seen before.

To your left a long bar, on your right a Charcuterie station, and in front three raised booths and several marble topped tables.   Its both polished and rustic in a balance of fit out that works very well.

The cocktail list is solidly Old School, which I approve of naturally, but they’re keen to give you want you want and will improvise or take your cocktail in a new direction if you’re inclined.

So Dirty Martini’s for us using the artisanal Gin from the USA Few (57%)… the drinks are set up in front of you, you talk to the gents behind the bar, and its a all very civilised.

Lovely cocktail glasses too for that matter.

But we weren’t feeling the heavy Gin hit that The Few offered (Jeremy called the Gin ‘barnyard style’ which was about right), so I opted for the elegant London style of #3 for us all, and that was just the ticket.

There was a wide selection of classic cocktails with a nice line or two about its inspiration with prices ranging from $12-$18, a Gibson Martini being $16.00 (see my survey post for comparison).

One thing about the menu though- they have a nice sentence about each cocktail’s history, but nothing about the ingredients in them. So if you don’t know what’s in a  French 75 you’ll need to ask, but perhaps that’s the idea.

There’s also a Molly’s Martini using two types of Gin (using both Tanqueary and Bombay) which is sailing close to the wind I think Martini-wise, but the team knew their craft, were engaging, welcoming and nothing was too much trouble.

So now for the tour, Lorezno the owner introduced himself and showed us about. 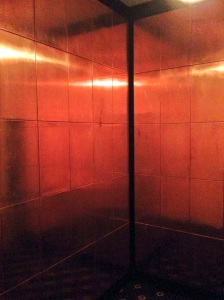 This beautiful copper lined room (pictured left) is my idea of a secure investment: you purchase your own bottles from the bar and its stored there for you- in discrete cabinets. It’d hidden away from the main room.

Already local law firms are using the service for client meetings – they call ahead, a tables reserved, glasses set out and the good stuff from the vault is served. Nice.

There’s a lot of engagement already between those in the know and the bar- Lorenzo’s strategy is to build long term relationships with them and offer a bespoke service to them.

They’ll get anything in for you, and there is no additional fee for the service.

But there’s more, open another locked door and there is the start of a whisky room, a glass cabinet will keep some precious spirits under lock and key, and another secret tasting room enables you to sample it.

There are more plans, but you’ll have to wait to find out more about those.

Lorenzo told me that his inspiration to create Molly was that he wanted to bring back to Canberra the old fashioned service, having worked in bars himself and he thought it was what the city was missing.  “I wanted to make it all about the guest, as opposed to the business owner.”

That’s why he built a big bar for people to sit at and interact with the bartenders.

“For me its about guests coming down the stairs, sitting down, having a chat with the staff, and we’ll give you options to customise your drink if you want. I want people to come and feel at home, get settled in, not get smashed and get out quick.”

“The way I’ve designed the bar is so guests are welcomed by the bar staff with eye contact, they ask them where you’d like to sit (booth, table or the bar) and then offer a menu.” he said. 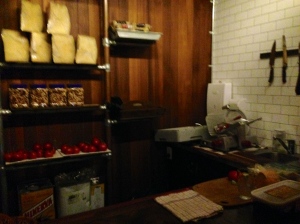 Molly offers a unique idea for food, something very european, offering a little bite of something light and fresh with your drink (ranging from olives for $6 to mixed deli plates for $25.00).

The charcuterie station has the finest imported cold meats and cheese cut fresh for you- with three different tasting plates available: French/ Italian/ Spanish, plus just a meat or cheese option.

So when you order, the staff will slice the cheese and meats for you fresh on the spot.

There are no plans to advertise: “We want people to do that for us by offering them a great experience and service over the bar.”

As for my guest, Jeremy loved it. He travels the world representing his Gin and he’s not easily impressed. For me, I think its a commendable and special addition to the cocktail culture here in the city.

The next night I popped in with my wife a pre-dinner cocktail on a Friday around 6pm and the place was jumping- full to the brim (their loading is about 90 people). No tables or niches left and it was a good opportunity to see how they handled a happy hour crush.

They were organised, one staff clearing the tables, one cleaning behind the bar, and 2 + assistant behind the bar which was kept very tidy at all times. Happily we were spotted by the owners and they fast tracked our orders which was nice, but watching the others waiting they were getting noticed, served and drinks in a pretty quick order considering- so they can handle the pressure.

My wife suggested they put hooks under the bar for bags, hats or coats for ladies which makes sense and the paper menus were getting a bit tatty already (a folder would be nicer) by way of constructive criticism.

Obviously though, given its only been not quite a week, their strategy is working and I wish them well.

Since I’ve published this post it’s been read over 1000 times, by far the most visited post. So expect a full house when you go- recommend earlier in the week!

A speakeasy, also called a blind pig or blind tiger, is an establishment that illegally sells alcoholic beverages. Such establishments came into prominence in the United States during the Prohibition era (1920–1933, longer in some states). During that time, the sale, manufacture, and transportation (bootlegging) of alcoholic beverages was illegal throughout the United States.

Speakeasies largely disappeared after Prohibition was ended in 1933, and the term is now used to describe some retro style bars.

Leave a Reply to phillipaj100 x

Finally a Summer we can get behind around here. Better late than never. 🍸🇦🇺
I’m fortunate to be able to work with the products of very fine craft distillers on my engagements. Coming up I have two very different events and strive to create something new each time. Z The talented team @wildbrumbydistillery in the Australian Alps have been inspired by their location to make some gorgeous releases like their limited release Morello Cherry Bitters and this gorgeous looking (and tasting) Peppermint Schnapps. Each of these will feature in these experiences in different ways and stay tuned for details later. 😉 It’s easy to be inspired to create something new when you have such fabulous ingredients to work with. 🍸🇦🇺 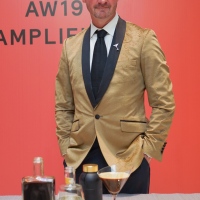