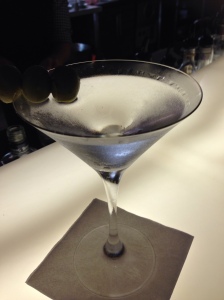 There are dog people and cat people, and then there are gin drinkers and those who prefer vodka.

When you look at the advertising + marketing of gin and vodka you see quite different imagery and language.

Vodka, on the other hand, is about purity, sleekness, sex appeal, night life, design forward, exclusivity (even if it isn’t production -wise).   Vodka snobs will say that gin is really spiced vodka, whilst gin drinks see vodka as a simplistic spirit suitable only for shots and nightclubs.

Disclaimer: I’m a gin drinker, and come to vodka reluctantly as my experiences of it have generally underwhelmed me. But it would be poor form of me not to give due consideration of this important spirit in the context of a Martini.

Especially when it’s the 3rd most drunk spirit (after Baiju and Whisky) with some 4.5 Billion litres a year consumed (see here ).  The biggest selling vodka is Smirnoff (1000 million litres) by a long shot, then Absolut.

So let’s get the Bond thing out of the way now.

Ian Fleming loved a drink, but was also a snob and I think giving his character 007 a shaken vodka Martini to drink said something about what an uncouth character in the books James Bond is, rather than an instruction on how to live. That said, there is not a bartender on the planet who hasn’t been asked for a Martini shaken not stirred.

So at least they’re drink Martinis!  In fact my first Martini ever, was such a drink long, long ago, so there is hope for us all. 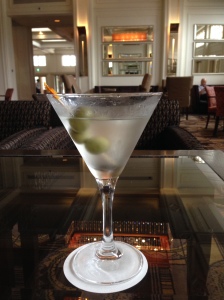 Vodka is a spirit distilled from starch or sugars in grains such corn or rye, potatoes, and even grapes and sugar beets, so that each vodka will have a different taste character depending on what it was distilled from. The differences between them can be, at times, so subtle as to be lost on the occasional drinker, but once you find one you like vodka drinkers tend to be very brand loyal.

Super-premium and premium examples are neutral in flavour, clean, and versatile, with a crisp finish.  We’ll won’t concern ourselves with the flavoured versions here.

Where the interest comes in then is how to make the Martini with the vermouth and garnish.

In my look at Dry Vermouths I mentioned that I sometimes struggled using the austere Dolin in a gin Martini, but in the case of vodka it would works really nicely.

You don’t want your vermouth to dominate, so I’d like it on the dry size, and a twist often works.

I sampled two excellent Australian Vodkas, one from Tasmania, the McHenry Puer Triple Distilled Tasmanian Vodka  and from North Queensland, the slightly flavoured Anjea  (distilled-with-honey)– both have been distilled several times for purity.

The McHenry has a softness and forward fire on the palette which is appealing, and a very neutral flavour. This lends itself very well to a elegant dry Martini, perhaps with a very thin lemon or lime peel twist.

The Anjea is much more robust and is spicier on the palette, very forward and the honey is a subtle note, not adding any particular sweetness. The lingering finish is smooth but you’re still getting a distinctly vodka hit. So with this spirit you could shoot for a dirty Martini, a Vesper (see below) or use an olive garnish. It could also handle being shaken if that’s your thing, whilst the McHenry is definitely one for stirring.

You could also look at the Heavy Water Vodka which I reviewed in 2013 and those from Kangaroo Island Spirits.

The key here in your mixing is being frosty. Vodka kept in the freezer, plus chilled glasses + mixer etc.

Let me remind you that you’re aiming for a cocktail that is smooth + elegant + crisp, not an alcoholic slap in the face.  Whilst a gin Martini will have a distinct personality due to the flavour profile of the spirit which tends to be so individual, with vodka, the differences will be mostly felt in the nuance.

Vodka does bring with it some clout by reputation, but both of my samples clock in at 40% ABV as opposed to most gins which are 42% ABV.

As an aside, the only decent cocktail where gin + vermouth live quite happily in the same glass is another Fleming invention: The Vesper.

There are a few variants, but you can simply mix equal parts, Gin (something robust like Beefeater would do), Vodka and Lillet Blanc in place of Kina Lillet which can be hard to get, with a couple of drops of orange bitters with a twist. Shaken, then poured neat.